Be Careful When Doing Tribute Advertising

Here in Richmond, VCU senior Melvin Johnson was named first-team all conference in the Atlantic 10 and led VCU to the second round of the NCAA tournament.

Be careful when doing tribute advertising to honor such stars. You could end up paying such stars fat settlements for using their publicity rights without permission.

In 2009, Sports Illustrated ran a commemorative issue to congratulate Jordan on being inducted into the Naismith Memorial Hall of Fame. Advertisers placed ads in the issue stating individual congratulatory messages.

Jewel, a grocery store later acquired by Safeway, ran an add showing a pair of basketball shoes bearing the number 23, which Jordan wore when playing for the Chicago Bulls. The ad text referred to Jordan as “a fellow Chicagoan who was ‘just around the corner’ for so many years.” Below the chain’s logo was the chain’s tagline “Good things are just around the corner.” 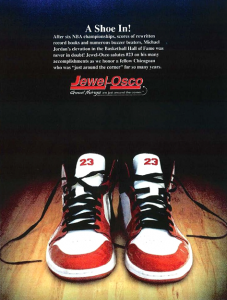 Dominick’s, another grocer acquired by Safeway, ran an ad stating “Congratulations, Michael Jordan” above a big display of “23,” his jersey number. Below that was the phrase “You are a cut above.” Below that was a $2 discount coupon for buying steak from Dominick’s. 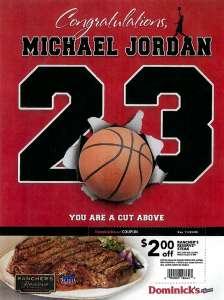 And Michael Jordan sued Dominick’s over this ad.

Jordan sued both companies claiming they violated his right of publicity, meaning that each store used his identity for their advertising purposes without his permission.

Jewel argued that the First Amendment shielded it from liability, noting that its ad was just a congratulatory message that didn’t expressly hawk its goods. In 2014, a federal appellate court disagreed, holding that this sort of “image advertising” – making yourself look good by basking in the glow of a hero – is not protected from liability by the First Amendment because the advertising promotes the advertiser’s brand awareness and loyalty.

Having won that preliminary argument, Jordan won an $8.9 million jury verdict against Dominick’s over its steak-coupon ad. Before the case against Jewel went to trial, in November of last year, Safeway reached a settlement with Jordan for both cases. While the amount was confidential, certainly it was a substantial sum.

Jordan donated the money to charity. He also issued a public statement saying he took legal action to not only protect his identity, from which he still earns millions every year in endorsement revenue, but also to set the broader example that no one “should have to worry about their identity being used without their permission.”

By the way, Safeway tried to pass on the liability to Sports Illustrated, arguing the magazine should be ultimately liable because it organized the tribute edition as an advertisers’ special. The trial court denied that attempt, leaving Safeway liable.

What are the lessons here for tribute advertisers?

Most importantly, everything is cured with permission. If you’ll be honoring someone in an image ad – an ad of congratulations that carries your branding – get that person’s permission in writing.

If you are advertising in a tribute issue, perhaps the organizer of the issue can get a written permission that covers individual advertisers.

If you will be giving an award to the honoree, such as a cash scholarship to a graduating student, get an advertising release in exchange for the check.

Next, realize you may be on the hook even if someone else organizes the advertising, such as a special advertising supplement in a newspaper or magazine.

Also, realize you don’t have to expressly advertise your goods or services to get in trouble. The Jewel ad was almost a pure congratulation. You can’t duck this issue by leaving your products and services out.

Finally, if you get written permission to run a “congratulations” ad, make certain you get permission from the correct rights holder. Sometimes celebrities form or hire a company to own their publicity rights and manage their endorsement deals, so you might need permission from that company. Just a verbal or email “OK” from the celebrity might not suffice. Of course, this is unlikely to be an issue with a local high-school scholar-athlete award winner or the like.

Everybody loves a winner, and sometimes consumers like to patronize those businesses that honor winners. Just be careful in how you try to ride on those adulatory coattails.